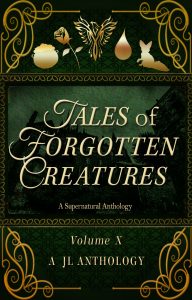 Belief in supernatural entities is not required, for they exist whether we believe in them or not. These seven expertly crafted tales provide brief snapshots into a life few ever have the opportunity of experiencing.

Delve into the lives of the mythical creatures that choose to create bonds with their human neighbors: a weary banshee learns that her power goes beyond a heartrending wail; a gargoyle risks his life to fulfill his duty to protect his charge; and a friendship is tested when one of them reveals the secret of his true identity.

Track down those mystical creatures that would prefer a life without human interference: after a thunderstorm, the race is on to seek out and protect the treasure at the end of the rainbow; and with his once quiet labyrinth now filling with noisy teenagers, the minotaur’s simple life is under siege.

Venture into the source of nightmares with the monstrous beings that spread terror and threaten our survival: a high school senior attempts to keep her pregnancy a secret when a Manananggal with an appetite wants the baby; and after making a deal to save her family’s souls, a peasant girl embarks on a series of dangerous quests.

Exploration into the unknown is the most noble of adventures. See the world through new eyes as you befriend, observe, and shy away from your supernatural cohabitants.